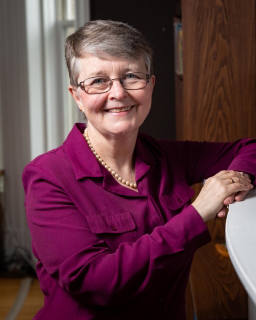 Marion Taylor grew up in Toronto and began her academic studies at the University of Toronto. Questions about how to negotiate the worlds of faith and the academic study of the Bible pushed her to pursue an MA in Near Eastern Studies and a Master of Divinity degree. Ultimately her journey took her to Yale University, where her interest in the history of the interpretation of the Bible was solidified. Under the direction of Brevard Childs, she wrote her doctoral thesis on the history of Old Testament studies as they developed at Princeton Seminary from 1812 to 1929.

At Yale in a class on apocalyptic literature, Marion met her husband Glen. Glen was from Calgary, but they returned to Toronto to teach at Wycliffe College. With Glen as residence dean, they lived at the College while raising three children and continuing to teach.

Marion began her search for forgotten women interpreters of the Bible in 2002, when a student asked if she could write a paper on a woman interpreter from the 19th century. This question has taken Marion on the greatest adventure of her life, as she and a team of students and scholars have unearthed the names and writings of hundreds of women throughout history. In 2006 she and Heather Weir co-published a collection of texts from 50 forgotten women interpreters, focusing on the stories of women in Genesis: Let her Speak for Herself: Nineteenth-century Women Writing on Women in Genesis. Marion and Christiana de Groot of Calvin College co-edited Recovering Nineteenth-Century Women Interpreters, a volume of essays published in the SBL's symposium series. Marion's award-winning book, Handbook of Women Biblical Interpreters: a historical and biographical guide (Baker, 2012), provides an exciting new resource for those interested in the history of the reception of biblical texts and theology. Women of War, Women of Woe, a collection of 19th-century women’s writings on the women in Joshua and Judges, co-authored with Christiana de Groot, was published in 2016; and in November 2016, Women in the Story of Jesus: The Gospels through the Eyes of Nineteenth-Century Female Biblical Interpreters, a collection of 10th-century women's writings on the women in the gospels which Marion co-authored with Heather Weir, was published by Eerdmans.

Marion has recently completed a commentary on Ruth and Esther, to be published in Zondervan’s Story of God Series. She has received several research grants to support her projects. In her spare time, Marion loves to read, write, and walk her dog at the cottage in northern Ontario.