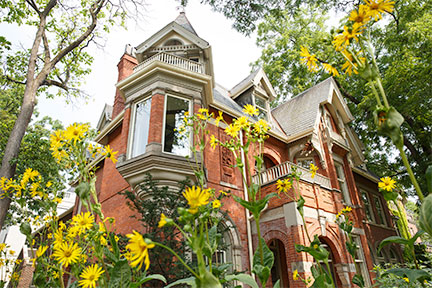 The Toronto School of Theology (TST) is a consortium of seven theological schools. Six of them are located on the St. George campus of the University of Toronto, within a few minutes’ walk of each other. One is in Scarborough, but it holds most of its classes downtown on the St. George campus. TST itself has a building at 47 Queen's Park Crescent East which houses most of the common administrative services of the consortium. The building is also home to a variety of faith-based organizations, which, while formally unrelated to TST, contribute to an intentionally ecumenical and vibrant atmosphere.

TST is the largest ecumenical consortium for theological education in Canada; TST at a Glance will give you a sense of its size and diversity.

We’re fully accredited by the Association of Theological Schools in the United States and Canada, as is each of our seven member colleges. Our academic standards are consistent with those of the University of Toronto, which holds us accountable through a highly developed process of quality assurance. The University of Toronto is regularly ranked among the top 25 research universities in the world.

In addition, TST has cordial relations with three affiliated member institutions: Conrad Grebel University College (Mennonite) at the University of Waterloo; Huron University College (Anglican) at the University of Western Ontario; and the Institute of Christian Studies (Christian Reformed) in Toronto. Our consortial system helps ensure theological diversity. Each of our member colleges and affiliated institutions is an independent, degree-granting institution with its own distinct history, denominational connection, community spirit, academic priorities, theological interests and approaches to Christian formation. Because each takes its own institutional mission and values very seriously, we resist the kind of homogenization that can sometimes happen in a unitary department or school. A fundamental principle of TST is the passionate engagement of different points of view.

In summary, by bringing together established and junior scholars from a wide variety of Christian and non-Christian traditions, in the context of one of the world's preeminent research universities, we offer students an exceptional opportunity to research and understand the Bible, Christian belief and discipleship, the history of Christianity and Church leadership, and to prepare for various forms of ministry in the contemporary world.

The TST consortium offers a full range of professional and academic degrees for different educational purposes. Some are primarily professional in character, while others are oriented to general theological studies or research. All our degree programs operate at the post-baccalaureate level, and a number of degrees are conferred conjointly by the University of Toronto. Our entry-level programs are the MDiv, MRE, MAMS, MSMus, MPS and MTS. Our graduate programs – that is, those that build on previous theological study – are the PhD, ThM, MA and DMin. All TST students are registered in a member college; TST itself does not register or admit students in degree programs, and does not confer degrees.