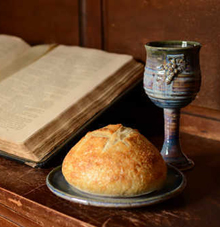 It’s Maundy Thursday in the Christian calendar - ne of the holiest days of the year in which the church remembers Jesus’ last prayers over bread and wine with his disciples. This incident and others led the early church to ritualize eucharist - the communal taking, blessing, breaking, and giving of bread and wine as the body and blood of Jesus Christ. Can we conceive celebrating Maundy Thursday without this ritual? Yet denominations are divided over whether, in a time of COVID-19, we can partake in eucharist virtually.

The Congregational Church in Elyria, Ohio, where I was formed as a Christian, impressed upon me, as a child of perhaps seven or eight, the solemnity and sacredness of this day. In a candlelit church we passed wafers of bread and small cups of juice through the pews, ending our prayers in darkness, standing and feeling our way out, hand over hand on the edge of the wood pews, my mother shushing me when I spoke to her and broke the sacred silence. I accompanied her but did not partake: that first communion was saved for Confirmation at the end of eighth grade, which followed three years of study during Lent. I don’t know now which day the older girls were confirmed: but I knew what they looked like. The old Sunday School classrooms ringed the upper level of a hall, and from there, I peered over the balcony where they were lined up in rows to walk into the church: these worldly eighth graders all wore nylon stockings and red or black plain leather flats with pointed toes. I longed to march with them but hadn’t even entered first year of preparation.

I grew up in a Roman Catholic neighbourhood, so I knew age didn’t matter when it came to eucharist. My best friend had already had her First Communion, wearing a white dress and celebrating after mass with her family with a cake. She could take the body of Christ - but I had years to wait. I could not have explained the ritual, but I longed to participate in its mystery.

I, like many female Protestant clergy (I later found out, comparing notes), had been intrigued as a child by nuns in habits: the piety of their hidden hands, the authority of the sway of their long black dresses, the simplicity of their veils, the mystery behind the drawn shades of their convent at the local high school. All of these symbols pointed toward an intimacy with God which I desired.

So, one day, I got a piece of Wonder bread from the kitchen. I took it to my upstairs bedroom, and on my dresser, used the ends of green plastic hair rollers to punch out white bready rounds of wafer size. I hid them in my drawer beneath my underwear and socks. A few days later, I had something that looked much like the unconsecrated bread of the eucharist. What I used for the cup was not memorable. My room was blue plaster - now, reminding me of the blue representing heaven in orthodox sanctuaries - and my large closet was built over the stairs, so it had a slanted floor where I could kneel and pray. I dressed in my habit: a dark skirt at my waist and one over my shoulders, a white bobby sock across my forehead pinned into a towel draped over my head, and took my wafers to the closet. I prayed that my Congregationalist mother would not look for me at this moment: I would have had some serious explaining to do. As Congregationalists we had a stronger relationship with the local synagogue than with the Catholic churches. My girlfriends could not attend Brownies in the Brethren Church without begin threatened with hell; Vatican II had not yet opened the doors for presence or dialogue. So religious trespassing also heightened the sense of sacred mystery which I sought to encounter.

And in that closet, in my child’s makeshift costume, I prayed and crossed myself and ate my Wonder bread transformed into wafers. I truly believe God heard my prayers and received me into God’s mystery. It was years before I celebrated eucharist in the church, but I’ve always thought back on this experience as one of profound union with the body and blood of Jesus Christ, born of intent and longing.

And so, tonight, each Christian is faced with the question: how do we celebrate? How do we pray? Do we wash our family’s feet? Is virtual eucharist real? How can we enter into intimacy with God in this strange time? In God’s sight, are we better off to skip the eucharistic ritual on Maundy Thursday, or do we enter it with faith and longing, knowing that, even in ordinary times, we can theorize but never fully explain or understand its mystery?